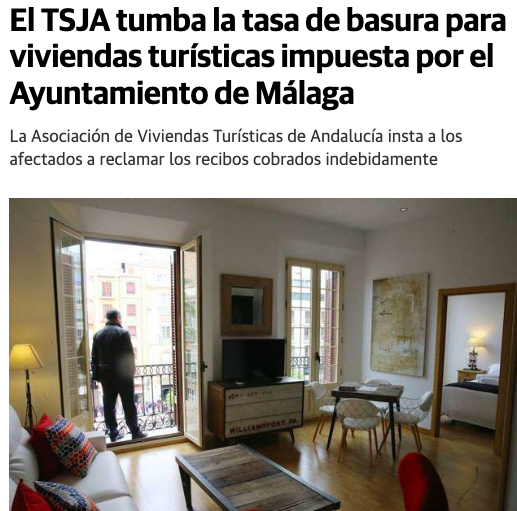 press release of the 14 June 2022 regarding the ruling on the garbage rate in Malaga for homes for tourist use.

The Justice agrees with the Association of Professional Housing and Tourist Apartments of Andalusia (AVVAPro) in its contentious-administrative appeal against the Malaga City Council for its decision to unjustifiably increase the rate for the collection of garbage from homes for tourist purposes. A judgment of the Superior Court of Justice of Andalusia (CHAS) that has just been known "declares the nullity of the municipal ordinance" and condemns the Consistory to pay the legal costs. The owners of tourist accommodation now have the right to claim the return of what was unduly charged during the time said ordinance was in force., which is currently not in use as the City Council subsequently approved a new, the actual, that AVVAPro has also denounced in court and that a judicial resolution is awaited.

in september 2018 (although it came into force in December after being published in the Official Gazette of the Province of Malaga) Malaga City Council approved modifying the Tax Ordinance 19 of the Tax for the collection of rubbish from economic activities, introducing an arbitrary increase in the tariff for houses with tourist purposes, based on an insufficient justifying economic-financial report and without a solid foundation.

“The City Council did not justify at any time in the economic report- than the amount of the rate established (modified) correspond to the cost of the services affected by the ordinance, by not concurring a complete and detailed financial economic study that would explain where each cost comes from and clearly specify according to what data the estimated amount of collection had been calculated ", explains the president of AVVAPro, Carlos Perez-Lanzac.

Unfortunately, this is not a rare or isolated case., because the administrations usually adopt measures without handling real or reliable data, assures Perez- Lanzac. “We never oppose new regulations as long as we base it on real metrics, because the administrations are misinterpreting the figures to make unfair decisions about the sector”. The highest representative of the association also requests that changes in regulations that affect it be negotiated and agreed with the sector.

AVVAPro took legal action in its day before this confiscatory measure of the Malaga City Council and without a solid basis to defend the interests of its associates and the entire sector. The association has always defended that the decision of the Malaga City Council violated the law for multiple reasons, among them “the insufficiency of the economic-financial report justifying the modification, that prevents, among other things, the criteria followed for setting the rates or the parameters to find the fee required for housing for tourism purposes, in addition to other principles such as legal certainty, proportionality and equality in administrative action Pérez-Lanzac considers the sentence to be very positive since the measure was taken "without justifying why tourist apartments are charged a fee for garbage collection that is different from a normal dwelling when there is no prove that percentage, nor the difference in residuals exhaustively. The only thing that is pursued is a confiscatory purpose, which intends exclusively to collect for this type of establishments that are not duly quantified either”.

About AVVAPRO
The Association of Professional Housing and Tourist Apartments of Andalusia (AVVAPRO) is an organization made up of companies, professionals and owners dedicated to the management of tourist homes in Andalusia, which aims to provide competitiveness and quality guarantees to this segment of accommodation, for the benefit of its users and related community.
The association holds the representation, through its members, from 9.000 tourist homes and close to 45.000 accommodation places distributed throughout Andalusia. Also, AVVAPRO exercises the defense and promotion of the general and specific interests of tourist homes in the region, forming part of organizations such as the Spanish Federation of Tourist Housing and Apartment Associations (FEVITUR), the Confederation of Entrepreneurs of Andalusia (CEA), the Costa del Sol Tourism Forum, the Plan8 of Seville and the Board of Tourism and Commerce of the City Council of Cádiz.

AVVAPRO encourages the positive contribution of tourist homes to the economy in aspects such as the deconcentration of tourism in saturated areas, deseasonalization and visitor loyalty, the promotion of family tourism, residential and in areas without shelters, Increased accessibility and comfort for users, the efficient use of the real estate stock and second homes, and the promotion of the rehabilitation of buildings in historic centers.

Other news of your interest

Manage cookie consent
To offer the best experiences, we use technologies such as cookies to store and/or access device information. Consent to these technologies will allow us to process data such as browsing behavior or unique identifications on this site.. No consent or withdrawal of consent, may adversely affect certain features and functions.
Manage options Manage services Manage vendors Read more about these purposes
See preferences
{title} {title} {title}